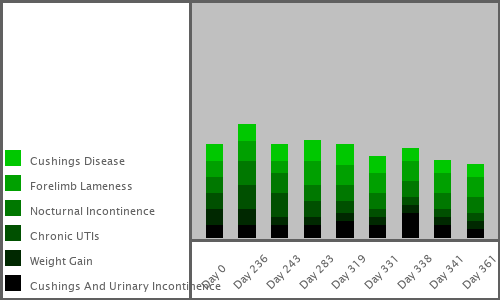 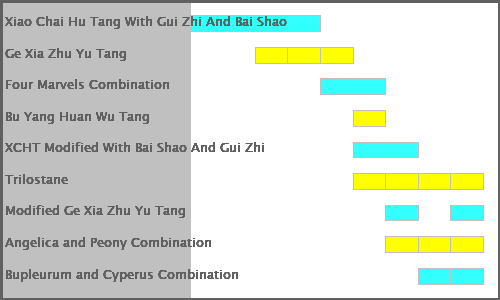 Notes:  Since starting the modified XCHT, dog has been far brighter, more playful and full of energy. She is continuing to slowly lose weight-- weighed in at 57# yesterday, down from a high of 68 last spring. But continue to be concerned about seeming recurrent UTIs. UA from that day showed significant RBC and WBC, some bacteria, despite almost 3 weeks on amoxycillin-- indeed, her incontinence got much worse when she started the antibiotic. Owners swear she does not drink a lot, but also tends to be a "marker" when urinating and they feel she never completely empties her bladder.

She had an abdominal ultrasound yesterday at referral hospital, report uploaded here. Thankfully, no surprises! Exam supported early pituitary dependent adrenal enlargement, and most other things pretty normal. No bladder thickening, so can rule out TCC as source of issues. Slight increase in liver parenchyma echogenicity-- etiology? RV wonders if some storage disease. Owner reports that she personally had significant heavy metal intoxication-- possibly from municipal water. Could the dog have gotten same? Is there any way to test without a biopsy?

As per Dr. Marsden, starting on Ge Xiao Zhu You Tang. Would like to treat with MBRT, but not if local vet will just put her on antibiotics over and over. Trying to initiate a conversation about that.

Notes:  Bloodwork trend-- ALT down, almost at normal levels, but ALP continues to rise, now at 1045 (23-212). Clinically dog doing pretty well: "Last week Tuesday-Friday no leaking. Sat and Sun leaking.Alertness is good. Energy is stable. Weight down to 55 last week. Chasing squirrels. Skin is having more dark spots and a few pimple like spots. Foot is bothering her again. I think the snow acted as a soft buffer for her. Still drinks a lot after eating. Some loose stool days."

Notes:  Had begun SMS back in March, since ALP kept rising. Owner reported incontinence better (no incidents) for a week. Then back to mild leaking, only when lying down, not necessarily sleeping. One toe on hind leg has collapsed like the two on front leg. Owner is very concerned about this ligament degeneration getting worse and wants to start Trilostane. Otherwise Placid is doing very well clinically-- lots of energy, good appetite, is now down to 53# from a high of 68 last spring. She still has the "look" of a Cushings dog, with the abdomen larger than you would expect. Today, bloodwork came back after 4 weeks on SMS and ALP is up further, and now ALT up too (last time, it was back in reference range. Am attaching blood work. I was going to start her on 50 mg Vetoryl SID, which is the very bottom of the recommended range. Will put this question on the forum. At the previous visit on 4/17, pulse was so weak as to be barely palpable at all levels, did not change with needling points for Shao Yang, Damp Heat or Bai Hui-- for yang def. I tried both tonifying and sedating.